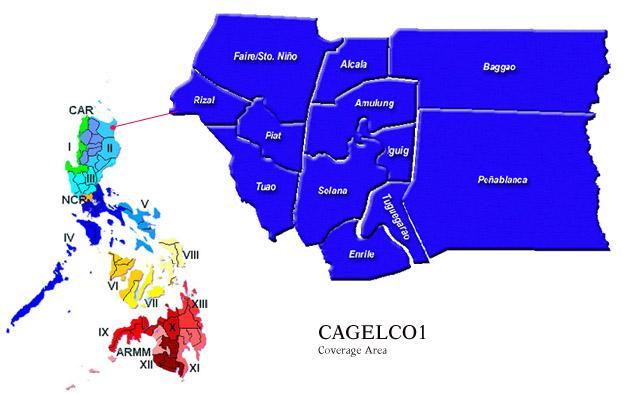 Cagayan 1 Electric Cooperative, Inc. CAGELCO 1) is one of the two electric cooperatives organized in the province of Cagayan. It was registered on November 15, 1971.

Originally, CAGELCO 1 had seven member municipalities namely Alcala, Amulung, Baggao, Enrile, Iguig, Peñablanca, and Solana. Later, the municipalities of Piat, Faire (Sto. Niño), Tuao and Rizal were added. When CAGELCO 1 started lighting the municipality of Enrile on December 12, 1975, followed by Solana on December 20 of the same year, the people of Tuguegarao clamored that this town, the capital of the province be serviced by the Cooperative. At that time, Tuguegarao was being serviced by the Tuguegarao Electric Power Company, owned by the Stoops and Andrews clan. With the strong clamor from the residents of Tuguegarao, the National Electrification Administration (NEA), CAGELCO 1 and the municipal government of Tuguegarao worked out the take over of the private electric utility system. In 1976, CAGELCO 1 finally took over this private electric system, thus Tuguegarao became the 12th member-municipality.

CAGELCO1 Serves as a catalyst for socio-economic growth by providing reliable, quality service and competitive rates.

Cagelco 1 is every consumers’s first and last choice